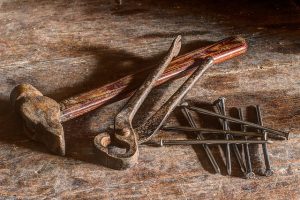 My grandmother, who passed away eight years ago, read through the Bible annually.  I still remember her in her house dress and bathrobe sitting in an old arm chair in the morning leafing through her well-worn King James.  I aspire to her consistency but not the house dress and bathrobe, they were kind of awful!  One reason I seem to stumble in my own attempts to read through the entire Bible each year has got to be the end of Exodus (and frankly most of Leviticus but that’s not relevant here).  For a book that starts out with a tremendous amount of action – a rescued baby, murder, exile, plagues and then the freeing of hundreds of thousands of slaves it seems to end with a whimper. The last chapters are essentially lists and blueprints. So much detail about things that are hard to get excited over – the clasps, the coverings, the curtains, the frames.  The gold, the bronze, the yarn and the acacia wood.  And don’t get me started on the cubits.  So many measurements!  These are all details for building the tabernacle and they go on for several chapters.  They always struck me as unnecessary for the modern reader, or maybe any reader.

This time through I was struck by something else though.  In the middle of the lampstands and tent pegs there seemed to be some very applicable things going on.

So, the Israelites are in the dessert on their way to the promised land (so they think!) and Moses comes down from Mount Sinai and tells them there are “things the Lord commanded you to do”. These things involved building a place (the Tabernacle)where God’s glory would dwell among his people and they would offer sacrifices to Him.

And while I don’t think any of us will be taking the curtain measurements (28 cubits long and four cubits wide in case you were wondering) for our own personal tabernacle or making frames of acacia wood (ten cubits long and a cubit and a half wide for those keeping track) there is something buried in here for us.

It starts with the call.  The Tabernacle needs to be built.  Then Moses asks that all those skilled to do the work the Lord commanded come forward. There were two things needed to answer this call.  First, skills and abilities. (Exodus 35:10 and 36:2 and 36:8).  God had gifted some people with the skills required to do the building, the spinning, the carving, the weaving.  These were necessary to complete the work God had given to Moses, to make the place where the Great I Am would dwell. But skill was not the only requirement.  Exodus 36:2 talks about those whom the Lord had given the ability and who were willing.  This is the second requirement – willingness.  God could have forced the Israelites.  It could have been part of his command.  The Tabernacle has to be built this way and you have to do it.  But while the command for a Tabernacle was incredibly specific (down to the last cubit!), the call was an invitation.  Those who were willing were to take part in the work.  You could have had the skills and abilities and heard the call but if you were not willing it did not matter, this was not your work.

I thought how much this applies to the church today.  There are things the Lord has commanded us to do (the Bible is replete with God’s calls to His people to love and serve in this world).  We have been given different abilities and we all have certain skills.  Then there is the last part – are we willing?  Will we accept the invitation and build the tabernacle we are called to build to draw people into God’s presence?

Another thing absolutely necessary for the building of God’s dwelling was the materials.  After Moses told the people what was to be done and why everyone “whose heart was willing and whose heart moved them” brought an offering for the Tabernacle. Here we find the same three things from before – the command or need (to build the tabernacle), the possession of what was required (in this case the stuff to get started as opposed to certain skills) and the willingness.  Again, I am struck by how much this applies to our lives today.  We’ve got the call throughout the Bible (see here, here, here and here – really I could have filed the rest of this page with here hyperlinks – look here’s one more) and we have been given resources – these vary from person to person but we all have something to give.  The final step is whether our hearts are willing.  Do they move us to share what we have?  God will not force it.  He invites us to partner with him to build his kingdom here on earth just as he invited his people to build him a dwelling in the middle of the desert.

So as it turns out even Exodus can convict and challenge – who knew?  Probably a lot of people just not me!  While I still question the cubits I now see the building of the Tabernacle in a whole new light.  God calling his people, who must have felt confused, frightened and uncertain as they left a known home for an unknown one, to partner with him with the resources he gave them, their material possessions as well as their own abilities, to build a place where he could dwell with them.  Should we not do the same?